Have you ever cooked something you thought would be quite nice that turned out to be unimaginably, shockingly, fantastically delicious? Well this is one of those things! Not to mention that it is meat-free with the main element being Swiss Chard, a vegetable I normally think of for a side dish or bulking ingredient for soups or stews.

Don’t get me wrong, that makes it sound as if I have little affection for Swiss Chard which just isn’t true. I think it is an unsung hero of the vegetable world! We grow it very successfully in our garden. Usually we grow two and they both turn out to be giants. The beauty being that you can just take a few leaves as you need them and just keep on returning for more. And they last for ages too, there is next to nothing going on in our vegetable patch at this time of year but the Chard still stands strong!

For me, Swiss Chard is a bit like two vegetables in one. The stem is hard and ridged – think ‘celery’ and you would be close. The leaves are more like robust spinach which doesn’t release water when cooked. Often people discard the stem and just cook the leafy part but as long as you cook them for different lengths of time, both are tasty. You can see my older recipes for Stir Fried Chard & Beans and Tomato, Courgette & Swiss Chard Stoup here.

I found this recipe on a fellow bloggers site – Stacey Snacks – and I bookmarked it for later use. I finally got round to making it last week and it literally knocked my socks off! Not only was it amazingly delicious, it was accompanied by a certain smugness that comes from making a meal out of next to nothing that tastes so damn good! I literally cannot emphasize enough how great it was and I insist that you all go out and get some chard and cook it at once!

This dish could be made vegetarian by using olive oil but I made mine using quite a lot of duck fat. Here in SW France, the locals cook almost everything in duck fat so I figured that I would do the same. It has a wonderful meaty flavour which works particularly well for this dish, especially when making the fried bread croutons! In fact it added such a gutsy depth  to this that my husband asked me if I had added Marmite, such was the explosion of meatyness! I would strongly recommend that you use duck fat also unless you are vegetarian of course.

This is a totally rustic dish. When I made it, I thought that it might need something to go with it, perhaps a pork chop or a slice of gammon. But when I tasted it I realised that it doesn’t need a thing, it is more than filling enough on it’s own. And that is part of it’s utter charm, it’s simplicity. A humble dish of bread, Swiss Chard and cheese, a truely satisfying poor mans plate proving that you can feed a family with next to nothing. What a fantastic recipe for today’s financially testing times – just one more reason why this dish is such a winner.

Just follow these instructions to achieve this incredible dish: 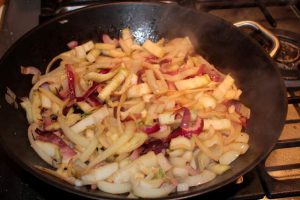 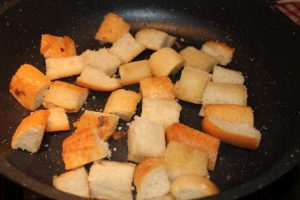 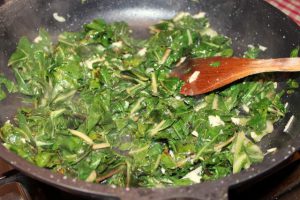 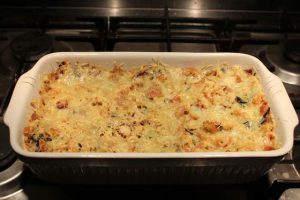 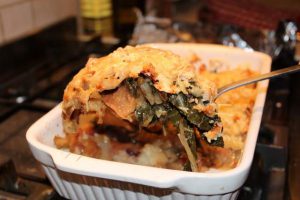 I have entered this dish into the blog challenge ‘Bookmarked Recipes’ hosted by Jacqueline over on Tinned Tomatoes.

I have also entered this into Credit Crunch Munch which is hosted by Camilla from Fab Food 4 All and Helen from Fuss Free Flavours.