I know I have been harping on about being back in my own house for a number of posts now and how happy I am about it. What I may not have mentioned is how fantastic it is to have unlimited access to our vegetable garden and fruit trees again. 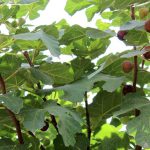 Having not lived here for 10 weeks, we were only able to come and plunder the veggies and fruit once a week meaning that lots were spoiled or grew to colossal proportions and were not at their best. It was so frustrating to put all the early work in and then not be able to fully profit from the crops.

But now I am back and I am doing my utmost to consume all that I can garner from these last few weeks of production. I thought I would tell you about a few little dishes that I concocted to make the most out of my garden. 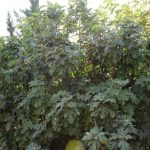 First  Figs. I adore figs but I have to admit our fig tree is something of a monster and produces far more fruit than it would ever be possible to eat! My husband hacked it back a couple of years ago with a chain saw as it was out of control. Two years laterit is bigger than ever!

I love the combination of fresh figs with savory flavors. They work wonderfully well with goats cheese and also blue cheese. I decided to try and make some canapés and came up with Warm Fig & Roquefort Prosciutto Cups. 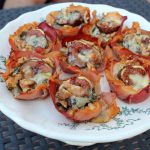 These were delicious and addictive. The combination of the sweet fig with the salty, creamy melted cheese was fantastic. The crunch of a few chopped walnut pieces and the crispy prosciutto cup made for a truly tasty treat. I used a shallow muffin tin as a  mold for my cups but actually, they would have worked better using a mini muffin tin as the cups were just a little too large to fit the figs as snugly as I would have liked. I can assure you that this did not detract from the taste though and they were greedily gobbled up and a few mouths were burnt in the process! 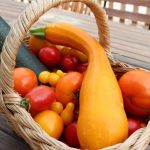 On to Tomatoes. This year we grew Lemon Boys, Yellow Pears, Carotinas, Purple Calabash, Black Zebras, Red Zebras, Pomadors & Rose De Berne! I love that we have such a wide variety of shapes, sizes and tastes. Some of them are so juicy and dense they are like tomato steaks when you slice them! My kids pick the Yellow Pears straight from the plants and stuff their mouths full as if they were sweets!

My favorite way to preserve some of our many tomatoes for later use is to slow roast them and then either put them in jars with oil or freeze them in pre-portioned bags. 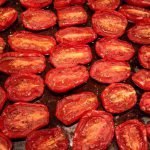 I use them to pep up all manner of dishes  pasta sauces, in quiches, in couscous, even in beef stews! So simple to make, just slice, season, drizzle with olive oil and some herbs and cook in a super low oven for 3 hours. They are intense and rich; little flavour bombs to add to your food! You may think why bother? but try them once and you will never look back.

Next  Courgettes. Normally I am drowning in courgettes over the summer months but this year we didnt get a great yield. That coupled with not living at the house, many that we did get grew too big and became marrows. But we still had enough and they are so versatile that we never get bored of them. Even the marrows all get used up eventually  take out the unpleasant seeds first then grate them into a Bolognaise or make soup with them; they too have endless possibility. 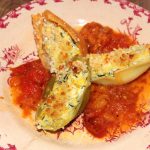 On this occasion I decided to use them to make a pasta dish which I served as a rather substantial starter but could work as a light lunch. I had a packet of those giant pasta shells lurking in my cupboard for a while and I was mulling over what to stuff them with. I decided on Courgette, Ricotta & Feta Stuffed Pasta Shells with a Garlic Tomato Sauce. I grated the courgettes and fried them with garlic, added Ricotta, pesto and Feta and lots of seasoning. I pre-cooked the shells and then gently filled them with the courgette mixture and topped with a light scatter of breadcrumbs and Parmesan and baked in the oven whilst I made the sauce. I peeled, deseeded and chopped some tomatoes and let them simmer in some garlicky olive oil and added a couple of tablespoons of my oven roasted tomatoes to enrich the sauce. The dish was a delight; creamy, unctuous filled shells with a tangy, rich tomato sauce. And it felt so good using ingredients that came straight from the garden, even the garlic was our own. Heavenly.

Since making these lovely dishes we have been away on a week long all inclusive holiday which was really just an exercise in gluttony. So next time folks, look forward to some rather tasty low fat recipes as I attempt to rectify the damage greediness has done to my body!