‘Paupiettes’ are basically little stuffed parcels of varying types. Common here in France are Paupiettes de Veau – where veal scallops are flattened until nice and thin and then stuffed with sausage meat, tied up, cooked and served with a creamy sauce.

You see them everywhere, you can buy them ready to cook in all the supermarkets. I think they look very appetising, these neat little parcels, promising something delicious within. Naturally I would much rather make my own than buy them ready made so I thought I had better give them a whirl.

I took inspiration from a recipe I saw in the French cookery magazine ‘Gourmand’ where cabbage leaves were used as the paupiette wrappers and then stuffed with chicken. This reminded me of a delicious dish I once had at the Mirabelle restaurant in London when it was owned by Marco Pierre White. There I had Pigeon & Foie Gras Paupiettes which were parceled up in cabbage leaves. A very good food memory indeed.

Cabbage is in season now and it is one of those vegetables that I associate strongly with Autumn. It’s a vegetable that goes so well with stews or with roasted meats, It’s for cold days, it is for simple cooking, it’s kind of old school.

But used as a wrapper for this delicious filling, the humble cabbage has become more exciting, more ingenious, it has elevated itself into something very clever!

The stuffing is made from chicken, mushrooms, garlic, onions, cumin and rosemary and it’s powerful stuff! This dish is robust, hearty, essentially rustic but also elegant. I made a creamy sauce out of the stock I cooked them in which added a softer note to the powerful flavours of the stuffing.

This is traditional French country cooking. Just the way I like it…

Using a food processor, blitz the bread to make breadcrumbs then place them in a bowl with the milk and leave them to soak. Meanwhile chop up your chicken, onions and mushrooms.

In a frying pan, heat the olive oil and fry the chicken until sealed and add the onion, mushrooms and garlic and cook for 5 minutes. Then add the cumin, rosemary and season. and cook for a further 2 minutes.

Tip the chicken mixture into a food processor with the soaked breadcrumbs and blitz until finely minced. Adjust seasoning if necessary and set aside. 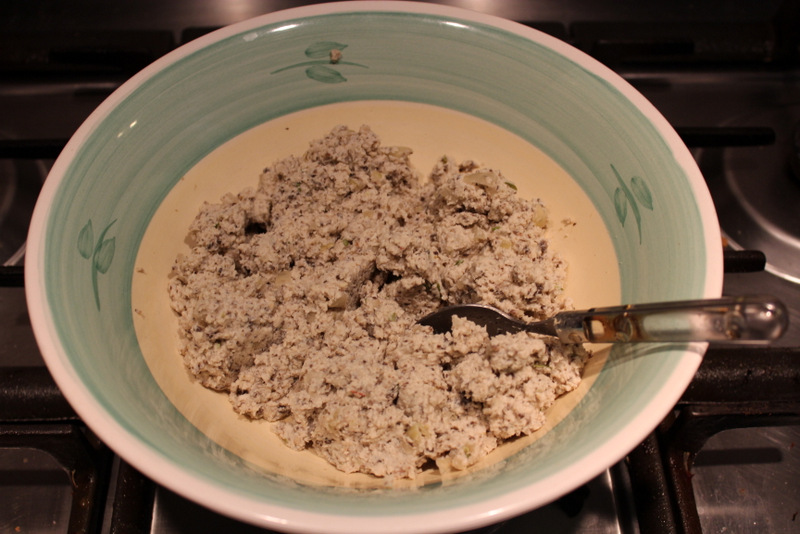 Carefully take the leaves off the cabbage keeping them intact. You don’t want any torn or damaged leaves. I prepared a couple of extra leaves just incase any tore whilst cooking. Add the leaves to a pan of boiling salted water and simmer for 10 minutes.

Drain the leaves and lay them out on a work board. Take a generous tablespoon of the chicken stuffing and place in the center of a leaf. Then fold in the sides as you would wrapping a present. Take a length of string and tie the parcel up and repeat with 3 more leaves. 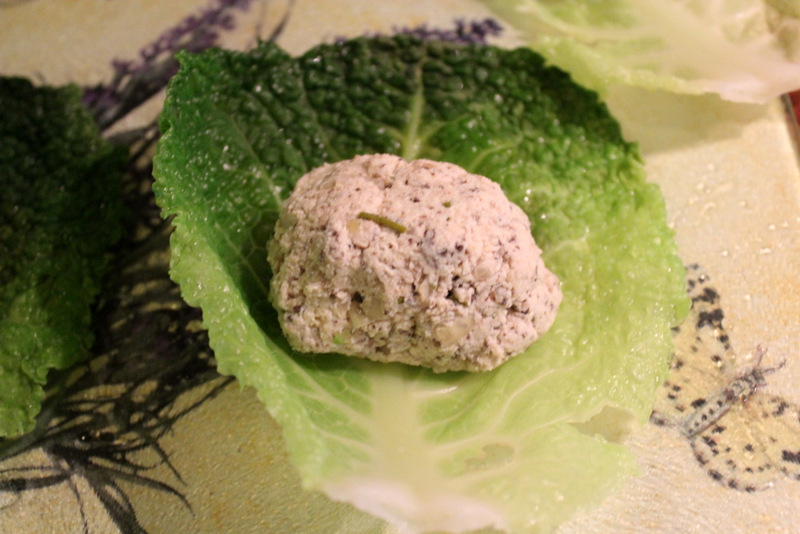 Place the paupiettes in a pan which has a lid, add the hot chicken stock, cover and cook for 20 minutes. 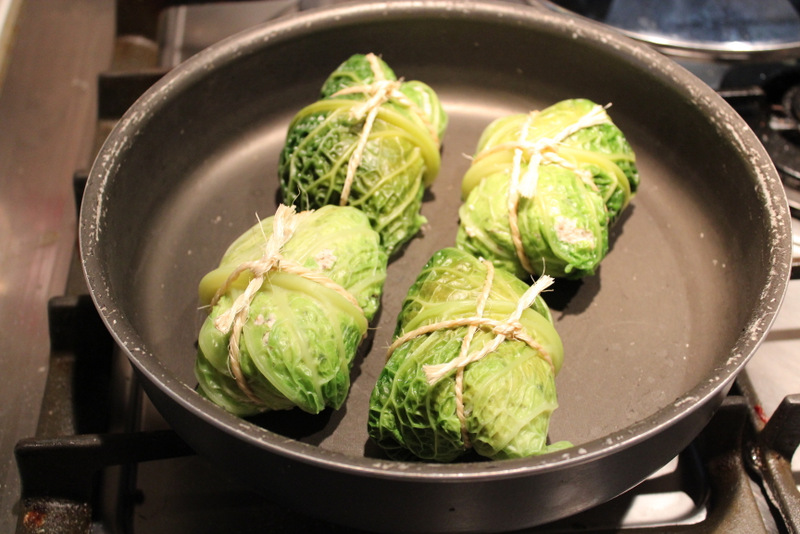 Remove the paupiettes and keep warm. Let the chicken stock reduce for a few minutes and then stir in the cream to make the sauce. Season and spoon over the parcels to serve alongside some buttered new potatoes with chives. And don’t forget to take off the string before you eat them! 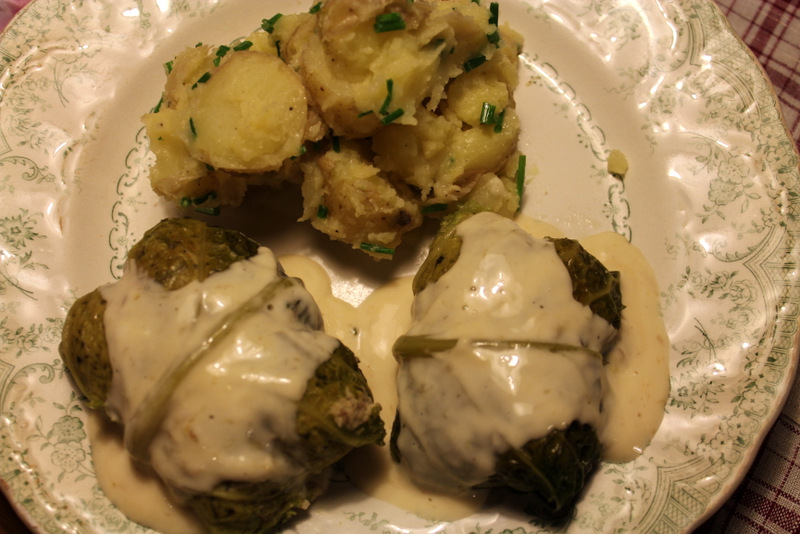 I am entering these tasty little packages in to Cooking With Herbs hosted by Karen from Lavender & Lovage.