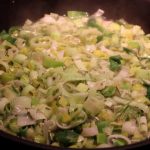 Leeks are in season right now and I absolutely love them so it seemed like a good time to come up with some new ways to use them. They are such a versatile vegetable, lovely in risottos, tarts, stews and on their own.

We grow leeks in our vegetable patch normally but this year we didnt. Im not too sure why  perhaps we just ran out of space, I dont recall. I do remember however that last years crop bolted and were inedible. We had some funny weather, really hot and then really cold.the leeks were not impressed. They grew a really hard strip right in the center which just wasnt right. In fact, I actually bought some from the supermarket which also had the hard bit in the middle so I guess we werent the only ones who had that problem last year.

Anyway, wherever you get them from, leeks are in abundance right now and therefore nice and cheap. Im all for seasonal produce, so leeks tick all the boxes for me. 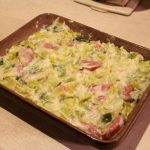 Fist of all, I tried to recreate a dish I remember my Mum making me when I still lived at home. She used to buy smoked sausage  namely Mattessons Dutch smoked sausage, she chopped it up and mixed it with leeks in a cheesy sauce and served it with a jacket potato. The leeks and the smoked sausage were a match made in heaven and I remember it being a really comforting and satisfying meal.

So I bought a garlic smoked sausage  I dont think its too important which sausage you buy just as long as it is smoked  and I set about making the dish with a few amendments. I sliced and steamed the leeks and made a gooey cheese sauce. 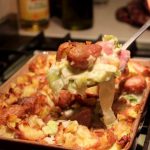 Then I mixed the sausage with the leeks and bathed it all in the unctuous sauce and put in an oven dish. I boiled some new potatoes in their skins and gently pressed them so that they were a little crushed and topped the cheesy leeks with them. I drizzled them with olive oil and whacked it into the oven to bake. The potatoes crisped up around the edges which worked perfectly with the creamy leeks. My Smoked Sausage and Leek Bake was completely delicious and hearty and delivered a cosy food cuddle! It lived up to the memories of my Mums dish and put a big smile on my face. 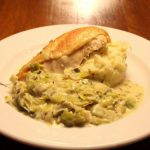 Next I decided I wanted to team my leeks with tarragon. I am very fond of tarragon but it is a very powerful herb and I dont use it all that much. I sometimes make a chicken, leek & tarragon stew which is fantastic and I wanted to do something a bit like that but more refined. Chicken with Tarragon & Mustard Leeks was the triumphant result! For this dish I used the leeks as a thick sauce to smother the chicken with. I fried the leeks with dried tarragon, then added a little chicken stock, Dijon and wholegrain mustards, a dash of cream and a little grated cheese. The soft silky ribbons of leek were coated in the rich, velvety sauce, fragrant with tarragon and punchy with mustard. They certainly perked up my humble chicken breast and a dollop of creamy soft mash brought the whole dish together. Another hugely comforting, snugly type dish! 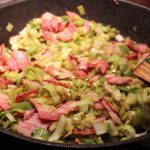 Last but not least I made Leeks & Bacon in Blue Cheese with Potato Rosti. This dish almost didnt happen but I was very glad that it did in the end. First off, I went to the fridge to grab my bacon lardons and discovered they had gone out of date! I hate wasting food so that put me in a bad mood from the off. Luckily I had some Flesk in the freezer (the Swedish equivalent of streaky bacon). I hurriedly defrosted it and chopped it up ready to go. Then I went to get my Roquefort cheese that I had been saving for this dish only to find it missing!! After some fruitless rummaging I gave up and asked my husband if he had seen it to which he confessed to having eaten the lot whilst watching the football a few nights before. Needless to say, I was not impressed. He sheepishly apologised and offered to dash to the shops to get me some more  which I huffily made him do! 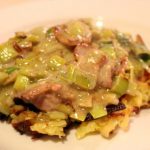 So thankfully the dish was salvaged and it was so damn good that it banished my bad mood completely! My Rosti were crispy on the outside and soft in the middle and complimented the cheesy leeks and bacon perfectly. I would offer a word of advice as the bacon and the blue cheese are both quite salty so season with caution. This dish was comfort food personified, winter warmth on a plate; guaranteed to banish your blues and leave you feeling chipper! Food that can do that to me is food I want to eat again and again.

There you have three lovely leek recipes. Making the most of ingredients when they are at their best is the greatest way to cook and eat. So go on, get cosy with some winter warmers and love your leeks 🙂

I am entering this post into Decembers Simple and in Season which is hosted by my friend Karen from Lavender & Lovage this month. And also to Made With Love Mondays hosted by Javelin Warrior’s Cookin W/Luv.

6 thoughts on “Loving Those Leeks!”