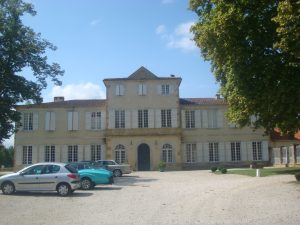 I have just got back from lunch at Chateau de Pallane where I got married six years ago. The sun was shining and the setting was beautiful. But times have certainly changed and instead of the indulgence of my wedding day, todays lunch was punctuated with the demands of two boisterous children. However, it was still a treat to be out to eat and at a place that holds such fabulous memories. Lunch was three courses  a buffet starter with a selection of salads and cold meats, main course was a Bavette with shallots and chips, and finished off with a Crème Brulee. All for 14 Euros. The bavette is a popular cut of beef here in France that you dont usually find in the UK. It is basically a trimmed piece of skirt and can be surprisingly tender and also inexpensive.

Cooking at home this week has continued to be motivated by the vegetables that have come straight from my garden. Beetroots a plenty, STILL lots of courgettes, tons of tomatoes and oodles of figs. Having such fresh and plentiful produce to use up means having to be creative so that you dont get sick of the sight of your vegetable gluts! I know many people round here that cant bear to look at a courgette by the end of September. Not so in our house though. 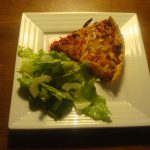 So, what new ways with beetroot this week?  I must admit that before growing them this year, I was a bit of a beetroot novice having never tackled them in their raw form before. So I am especially enjoying rising to the challenges of my beetroot and over coming the unfounded fear I had of them! As long as you wear latex gloves, all is well! Otherwise it can look a bit like you starred in a slasher movie Anyway, this week I made a Beetroot and Onion Tart (inspired from BBC Good Food) which I thought was simple and delicious. I chose to use shop bought pastry to make this a much quicker mid-week meal. The wonderful, almost neon pink that beetroot gives to food is so unusual and makes looking at your dinner almost as good as eating it. The sweetness of the beetroot contrasts perfectly with the savoury onions. Just make sure you add plenty of salt. The leftovers kept well for a cold lunch the next day. 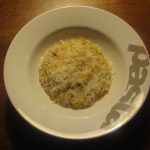 Then I moved on to tomatoes. These have always been tricky in our house as my husband detests them in their natural tomato form but likes the flavour. I think it is a texture issue and I know quite a few people like him. So I have to be super inventive in order to work through such a large quantity without actually serving them au natural. This year we have grown a good variety of tomatoes, my favourite being Lemon Boys. They are incredibly sweet, nice and big and fairly easy to deseed. So I picked all I could from the garden and spent a good hour skinning and deseeding whilst the kids had their nap.  Rather a repetitive job but one that I find quite therapeutic and calming. When I had finished, I had enough to freeze two bags worth to use as chopped tomatoes later and also enough to make my Tomato and Courgette Risotto. I love using Lemon Boys for this recipe as the risotto retains its creamy colour despite being packed full of tomatoes. A handful of grated courgette at the end of the cooking time adds texture and a little bite. My husband says its the best risotto recipe he has ever tasted and I know that is high praise indeed as it is tomato based and doesnt contain any bacon.! A very gratifying use for lots of tomatoes.

I fear that the wasps might well be winning the war of the figs this year as for most of the day; I am too scared to go close enough to pick any as the buzzing is deafening. But if I find a few minutes early enough in the day to catch them when they are dozy, I can grab bagfuls of figs within minutes. We had some guests arrive at the weekend for a holiday in our Gite and we welcomed them with a glass of wine and a figgy nibble. Just wrap half a fig with half a teaspoon of cream cheese and a sun blush tomato all together in half a slice of Bayonne ham. I used tomatoes we had slow roasted in olive oil and Herbs de Provance ourselves, but sun blush would do just as well I am sure. Tasty little nuggets of joy.. 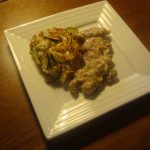 And finally, I cooked something tasty on Saturday night as I think that Saturdays deserve   indulgent dishes. I made a Courgette Gratin (a recipe I take from Jamie Oliver which he says was inspired by a dish he saw made here in Southern France) and coupled it with some very special pork. The thing that drew me to the courgette recipe was the use of duck fat. It really adds a depth of flavour that cannot be replicated with any other fat and here, adds a meaty quality to a vegetable dish. It is sumptuous and oozy and I adore the recipe. With it, I cooked Fillet Mignon with a Marsala sauce. We are very lucky indeed to be friends with some Organic farmers out here and when we can, we buy pork straight from them. It comes from the traditional Gascon Black pig and we know that these pigs have lived happy lives. The meat itself is quite extraordinary and is quite dark, not like any pork I have seen before. Teamed with the courgette gratin, it is a meal which has a rustic elegance and unbeatable taste.

Yes, this week I have most certainly dined well. Now I can think, love and sleep well too.

1 thought on “One cannot think well, love well, sleep well, if one has not dined well  Virginia Woolf (A Room of Ones Own)”