Hot on the heels of my guest post on A Reluctant Foodie for Authentic Swedish Meatballs, I decided to go full on Swedish style and bring you another couple of recipes that will delight and possibly even boggle your mind!

All my Swedish relations were delighted that I had posted a Swedish recipe. My Uncle has been sending me recipe magazines and plenty of messages of support, all of which have inspired me greatly and I have been delving into the crazy world of Swedish cuisine with gusto. 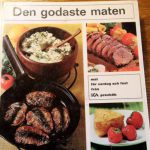 fascinating, some down right strange!

Mum and I spent a lovely afternoon perusing it’s pages, stumbling over the translations and pondering over some of the combinations. It was a so nice to hear Mum reminiscing about her childhood food memories. I stepped back in time with her and knew that I just had to make some of these dishes that she held so dear.

The cookbook has very few photos to accompany it’s recipes so I had to picture them from  how my Mum described them. The instructions are also minimal and to the point so the making of these dishes was somewhat a journey of discovery.

The first recipe I knew I had to make was for Kroppkakor, roughly translated as Body Cakes – although that does not in anyway explain what they are! Mum told me how she remembered eating them as a child when visiting her Grandmothers Farm up in the cold North of Sweden. It was one of my Grandfathers favourite things to eat and he was brought up on them. Mum would always ask to have them when she was visiting the farm but her Father would say it was too much work for his Mother….but she, being a loving Farmor, would make them anyway!

Mum described this bizarre potato dish, moulded into a ball, stuffed with spices and Flesk (bacon) then boiled and eaten with melted butter or cream and plenty of Lingon sauce. Sounds strange to you? Well, you would be right! 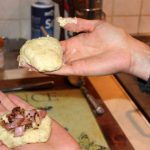 Mum and I made this together and I had no real idea how it would taste until it was ready to eat. Flesk (like thick streaky bacon) is fried with some onion and and kryddpepper (allspice). Allspice certainly packs a punch and is prevalent in Swedish cooking. 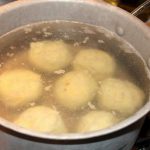 That wonderful aroma of cloves, cinnamon, ginger and nutmeg you might associate with Christmas, a popular spice in a country famed for it’s winters and snow!

Boiled and grated potato is mixed with egg and flour to make a dough and divided into patties. The bacon mix is placed in the center of one patty and then another is placed on top and moulded into a ball and sealed. 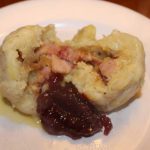 These balls are boiled until they float and then they are ready to eat! I can only describe them as a sort of Christmassy potato dumpling! They feel old fashioned, evoking nostalgia of farmhouse cooking, cold winter days, when money was tight and you ate food to warm and bulk you up. I loved them! Perhaps as much because of their family history for me as for their taste…. 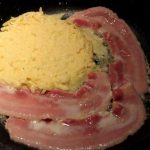 Next I made Raggmunkar; just the sound of this in your mouth as you say it is intriguing and wonderful! There’s no real translation of this dish into anything more English that I can give you. It is what it is, Raggmunkar.….

They are essentially potato rosti but made with a batter so they end up more like a grated potato pancake….and they are truly delicious! My Mum made them sound so appetizing that I had no choice but to make them. She said they should be thin and crispy, served with streaky bacon, cooked in the pan at the same time so soaking up all the lovely bacony juices. And a dollop of lingon on the side. 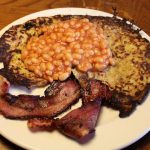 Unlike thicker potato rosti I usually make, these Raggmunkar use raw potato. In a thicker rosti  you would risk that the potato would not be cooked all the way through but not so with these as they are cooked so thinly; it just gives a nice texture.

I ran out of lingon and so I served these potato pancakes with some baked beans and the last of my flesk. They made a satisfying and tasty brunch for all the family. They would also be delicious with an egg on top.

So there you have it; two interesting and unusual Swedish dishes for you to ponder on. If nothing else, I have taught you two fabulous new words: Kroppkakor & Raggmunkar. Go on, say them out loud, they really are lovely, just like all things Swedish!

I am entering these two recipes into a few blog challenges. Firstly, into Credit Crunch Munch which is hosted by Camilla from Fab Food For All and Helen from Fuss Free Flavours. These recipes certainly qualify as filling and cheap to make!

Secondly, Made With Love Mondays where all recipes must be made completely from scratch with no short cut ingredients.