A few months ago, my husband and I went skiing and we stayed overnight in a Pyrenean resort called Saint Lary. The weather was in fact so cold and snowy that the slopes were closed and we didn’t get to ski. So instead we took advantage of our time alone and drank lots of red wine and enjoyed a few meals out!

For lunch we headed to a little Tapas restaurant where the Menu Du Jour consisted of picking 3 cold Tapas, then 3 hot Tapas and finally 3 dessert Tapas. I was expecting an array of traditional Spanish treats but instead, I was offered a very French interpretation of Tapas styled dishes. At first this made us smile as it seemed so typical of the French to purport to be a Spanish restaurant but then serve dishes that were doggedly French! But as the meal went on, I was increasingly delighted and ultimately inspired by the delectable mini morsels which celebrated French ingredients so well.

An idea began to form where I could create a menu in the style of this French Tapas meal but elevate it into something more refined and elegant. Last weekend I gave it a go and heres how it turned out:

For the first course, I stayed with the idea of three cold Tapas. I opted first for Salmon Rillettes, a recipe I have adapted for this meal and made many times before. It is basically a chunky salmon pâté made with a mix of smoked and poached salmon, shallots, cucumbers and dill bound together with a little crème fraiche and a little mayonnaise. 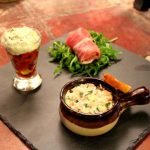 It is light and flavoursome with the flakes and ribbons of the two salmons soft and silky in texture complimented by the fresh crunch of the shallot and cucumbers. It is perfect spread on a thin slice of toasted baguette. And I completely adore the little brown earthenware pots I used to serve it, so dinky! Alongside the Rillettes I served Verrines of Ratatouille with Fresh Goats Cheese which I have blogged about before as I made them as a New Year canapé. These are so pretty and appetizing, the salty Goats cheese contrasts perfectly with the sweet, garlicky vegetables. Stunning and scrumptious! And the final element of the first course was a Bayonne Ham Wrapped Fig & Roquefort Parcel. Easy to assemble; this is simply a joyous nugget of French produce! In fig season, I would most certainly opt for a fresh fig but on this occasion, I had to make do with dried and it was still a delight. The salty ham, sweet sticky fig and the bold intense Roquefort all unite and celebrate each other perfectly. These parcels would also work very well as a stand alone canapé, edible with just your fingers.

I knew for the hot course that I wanted to include duck breast as duck is synonymous with South West France where I live. So, I made Slices of Duck Breast with a Balsamic Drizzle. Duck breasts are ginormous here and you really only need a few slices. 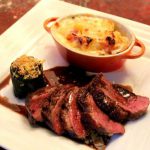 The balsamic drizzle sets off the richness of the duck perfectly, it is just simply harmony. Alongside the duck, I decided to make a Tartiflette, typically a dish associated with skiing and the French mountains. It is a luxuriant mix of potatoes, bacon, white wine and Reblochon cheese, a bubbling, oozy, creamy bake that conjures up scenes of log fires in snowy settings. The ultimate in comfort food this bake can stand alone as a meal but served moderately in dainty pots, it did not overwhelm the other elements on the plate. In fact, for me and my guests, it was one of the highlights of the whole meal. And the last element of the hot course was a Roasted Courgette Stuffed with Mushroom Duxelles. A Duxelles is a finely chopped mixture of mushrooms, shallots and herbs, traditionally used in the stuffing of Beef Wellington. For these courgettes I used a melon baller to dig a little crater which I stuffed with a garlicky Duxelles and topped with a sprinkle of breadcrumbs and Parmesan.  These turned out just the right size and very, very tasty.

Lastly, the 3 tapas desserts! This course is wonderful because you get to have 3 delicious desserts instead of just one, ah blissful! The first of these treats is a Salted Caramel Chocolate Pot. I am a total sucker for salty chocolate so I was immediately drawn to this recipe. 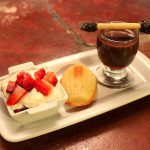 A little layer of salty caramel at the bottom of your glass, topped with decadent chocolate and cream and a few flakes of sea salt for garnish, it is dessert heaven for me! I made the little chocolate dipped sticks to sit on top and they completed the look. Next, I opted for Honey and Vanilla Madeleines. These shell shaped cakes are immediately recognisable as being French and have been around since the 18th Century. They are light and fluffy and the honey and vanilla gives them a wonderful sweetness and aroma. So pretty and so very French! And finally, the last dessert, a little layered Strawberries, Meringue & Crème Fraiche. Ultimately, this one may evoke similarities with that old British favourite Eton Mess but it can work here too as the French love meringue and the firm type of meringue is actually known as a French Meringue. Strawberries work so well with lightly whipped Crème Fraiche which is sharper than heavy cream and the chunks of meringue give sweetness, texture and crunch.

Ultimately, this meal concept worked very well. Each element stayed true to the French theme, the portioning was just right and none of my guests felt that they had over eaten. I was happy with the way each plate of food looked being a huge fan of using a variety of vessels for presenting food. I guess you cant really call it Tapas as such, but this idea of distinct elements brought together as little tasters is one I most certainly enjoyed!

Which French treats would you have included? The options are limitless! Bon appétit mes amis!