A good sauce can be the making of a great meal. In my mind, sauces can be difficult to master, shrouded in a mysterious, mythical sauce making secrecy that only legendary chefs are privy to. (Ok, maybe I exaggerate!!) So I thought I would explore some of the old school sauces of rural France; where simple folk produce world class food, and see if I can crack the secret!

Some ten years or so ago, my husband and I were lucky enough to have lunch at La Tour DArgent in Paris. It is a truly incredible restaurant which at the time we ate there, held 3 Michelin Stars. Steeped in history and tradition, the restaurant has served film stars, politicians and Royalty through the years, even as far back as the last Tsar of Russia. They are particularly famous for their duck dishes and when we ordered the Duck à LOrange, it was served by a team of waiters including the sauce guy. His only job was to create the sauce, table side, using a Duck Press, similar to a wine press, which extracts the blood and marrow from the bones. This method was invented in the restaurant in the 19th Century. Then he heated up these juices with some duck liver and other bits and bobs to create a sauce so sublime that I will never forget it as long as I live.

Although this was one of my most awesome culinary experiences, it is also partly responsible for my being intimidated by sauce making ever since. I set out to conquer my irrational fears for this blog and I believe I have succeeded!

I have recently been studying French Provincial Cooking by Elizabeth David; a fantastic book full of traditional recipes from rural France. It’s recipes are minimal, written in a rudimentary style with no pictures or wordy instructions; which only adds to its authenticity. From it, I chose three sauces that interested me and set about recreating them faithfully in my farmhouse kitchen. 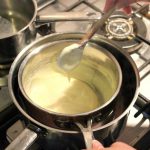 To begin with, I attempted a classic Sauce Mornay, which is essentially a cheese sauce. I have been making cheese sauces my own way for many years but on this occasion; I diligently followed the recipe as it was written to see if it would make any notable difference. I began by making a simple béchamel made in very much the same way as I would do. 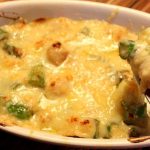 But then the recipe very clearly states that the sauce must be cooked for at least 10 minutes in order to ensure that the flour is completely cooked through and the best way to do this is in a bain-marie so that the heat surrounds the sauce ever so gently. So, I followed these instructions and found that the sauce became very smooth and quite thick. When suitably thick, I removed it from the heat and added a mix of Gruyere and Parmesan cheese. A Sauce Mornay goes perfectly with fish, vegetables or even eggs, which are then reheated in the oven so I decided to create a Bay Scallop & Asparagus Mornay which I topped with a little extra Gruyere. I can honestly say it was divine; slightly sweet, soft little nuggets of scallop with tender asparagus all smothered in a rich, creamy, cheesy sauce. What is not to like??? 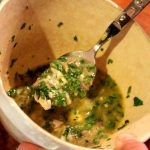 Next I moved onto a sauce that seemed much more unfamiliar but fascinating; Sauce Vinaigrette a lOeuf  Vinaigrette & Egg Sauce. When I first read this recipe, I was struck by the curious use of a runny egg yolk and chopped egg white in a cold vinaigrette and I knew that I had to taste it to fully understand it. 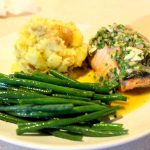 The sauce contains a finely chopped shallot, oil, vinegar, parsley, chives and egg; and as I put it all together I was reminded of an Italian Salsa Verde which goes so well with fish. I served my sauce with some fresh salmon and it really made a delicious dish. The sauce is super punchy with the sharpness of the raw shallot and zing of the vinegar, all made softer and richer with the addition of the egg which added body. It contrasted with the soft oily flesh of the salmon perfectly and I would certainly serve this for a special occasion as it was most definitely memorable. I urge you to try it, so simple and so striking. 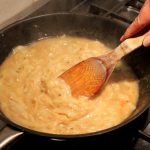 And finally, a Sauce Robert  Onion Sauce with Mustard. Straightforward to make, delicately flavoured with a perfect pouring consistency, it made a superb alternative to gravy when paired with roasted pork. Onions are sweated in butter, then a little flour is added to thicken and then stock. 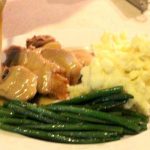 The sauce is sieved, the onions discarded after imparting all their flavour and a good teaspoon of strong Dijon mustard is stirred through. The sauce is piquant and rich but does not over power the pork. It would also work very well with chicken. It does not take long to make and is very versatile, a great staple to have in your repertoire. It certainly added a fabulous French twist to our Sunday roast.

So there you have it, 3 truly authentic French sauces, tried and tested. Dont be afraid, given them a go! Bon appétit!